Solskjaer’s position is in the balance after back-to-back defeats and he could be sacked if United lose to Everton on Saturday. (Star)

Alternatively, Solskjaer will not be sacked regardless of Saturday’s result. (The Athletic)

The Manchester United manager retains the support of the board and is still viewed as a long-term appointment at Old Trafford. (Sky Sports)

Tottenham owner Daniel Levy has offered forward Son Heung-min, 28, the same wages as captain Harry Kane in an attempt to ensure the South Korea international stays at the club. (Express)

Arsenal are set to discuss extending the contract of Egypt midfielder Mohamed Elneny, 28, who has impressed since the start of the season. (Mail)

Bundesliga side Schalke may be willing to allow 20-year-old Turkish centre-back Ozan Kabak to leave for 20m euros (£18m) in January. However, English champions Liverpool are interested in his 19-year-old Finnish team-mate Malick Thiaw. (Bild – in German) 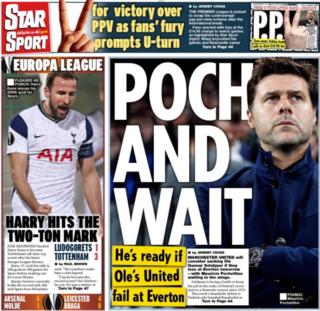 Euro 2020: Who made your Wales starting XI for Sunday’s game against Italy?

Germany clicks at Euro 2020 with 4-2 win over Portugal

Euro 2020: Standings, fixtures and opponents – all you need to know