Bayern Munich chairman Karl-Heinz Rummenigge says he wants Austria defender David Alaba to stay at the club, but the decision lies with the 28-year-old. (Bild – in German)

Norway forward Erling Haaland, 20, does not have a release clause in his contract, says Borussia Dortmund chief executive Hans-Joachim Watzke. (Bild – in German)

Ajax and Mexico defender Edson Alvarez, 23, has revealed his desire to one day join Manchester City. (Voetbalzone, via Goal)

Manchester United missed out on the signing of Bayer Leverkusen‘s French winger Moussa Diaby, 21, in the summer transfer window. (Bild, via Mail)

Manchester United forward Mason Greenwood, 19, is expected to return to the England squad on Thursday. (Guardian)

Arsenal boss Arteta is not ready to talk about extending 28-year-old Egypt midfielder Mohamed Elneny’s contract, which expires at the end of the season. (Goal)

Conversations between Spain defender Sergio Ramos, 34, and his club Real Madrid have begun over a new contract. (ESPN)

The Premier League will hold talks with broadcasters as to whether it should continue with the pay-per-view system following a meeting of all 20 clubs on Thursday. (Telegraph)

Leeds United owner Andrea Radrizzani, 46, says he is open to a multi-club ownership model, similar to that of Red Bull and the City Football Group, the owners of Manchester City. (Yorkshire Evening Post) 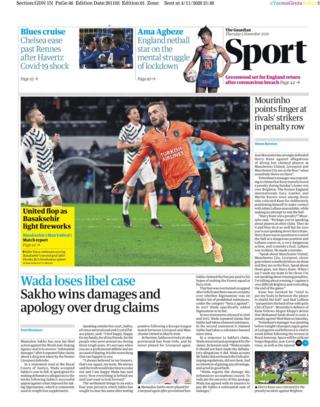 Ellie and Gary Brazil: The footballing father and daughter