Despite sitting down as she shells bright-pink beans, Margaret Tindimutuma’s swollen feet are in pain. The Ugandan matriarch has a rare type of elephantiasis that has caused her family untold suffering.

“I have always had allergies since I was young. So when my legs started to develop little swellings, like boils, I didn’t think much of it,” the octogenarian says as she sits on a papyrus mat in the centre of a compound of mud houses.

“But the pain became so intense, I would feel pinpricks all over. The skin in between the toes broke out in sores. Then my sons started to fall sick. I wondered if they had inherited my illness.”

Her two grown-up sons both died after sores caused by the disease became infected, one in 2017 and the other last year. 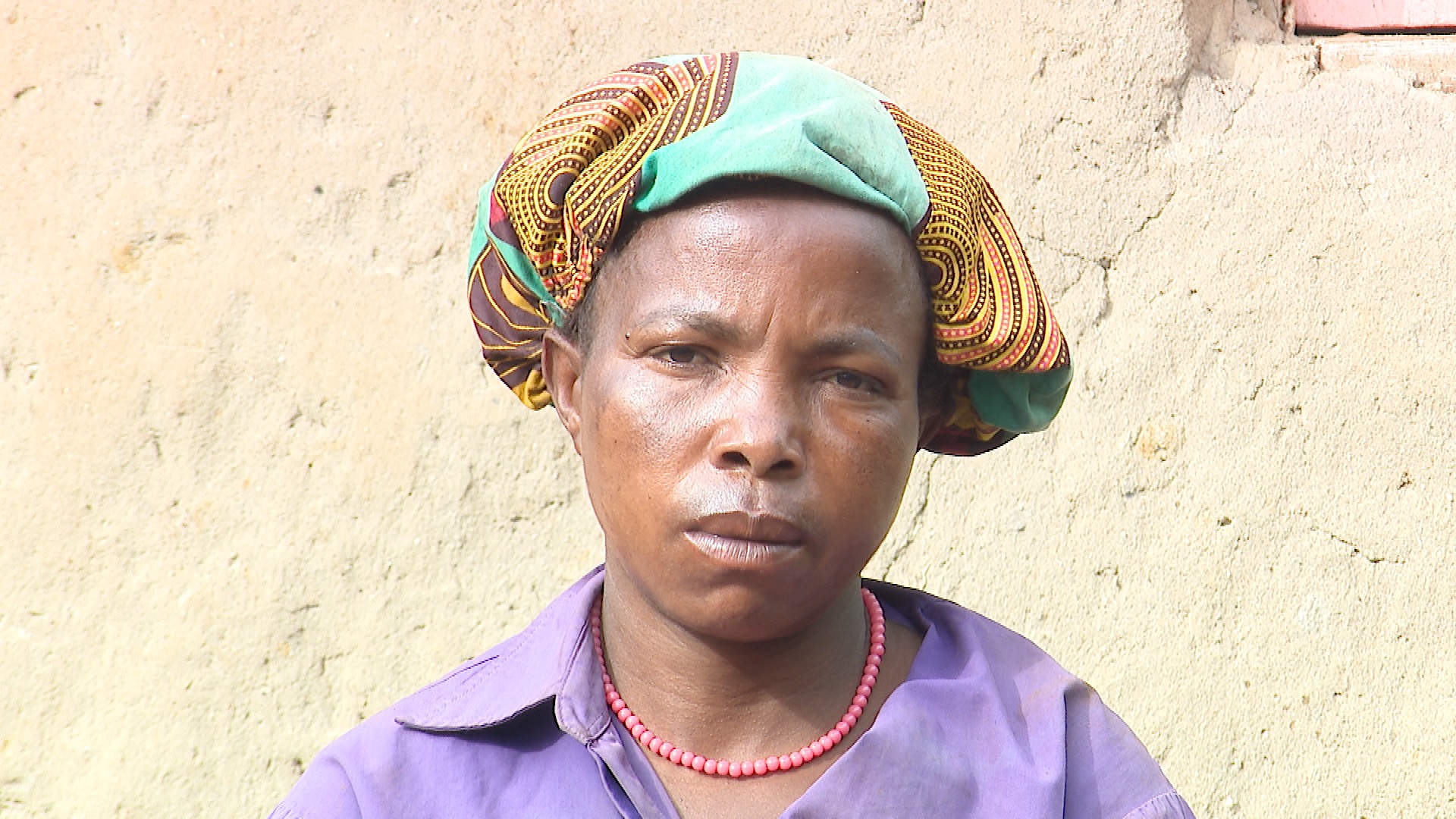 When we could afford painkillers, my husband would walk around. But by the time he died, he couldn’t even leave his bed”

We sit on a wooden bench in the yard, as Hope Amooti, the widow to one of them, shows me photographs of happier times. Her husband of 18 years was a tall man and in one picture he has a broad smile and shyly looks at the ground.

“When the pain in his legs overwhelmed him, his back grew permanently arched.

“When we could afford painkillers, he would walk around. But by the time he died, he couldn’t even leave his bed,” Mrs Amooti says, shielding her welling eyes from the morning sun.

In another photograph, Mr Amooti’s younger brother sits with his sisters in a decorated tent. He has no shoes on, and you can see that his feet are slightly puffy, the skin between the toes broken and peeling.

Enid Twasiima, one of Mrs Tindimutuma’s daughters who had been married in another village, fell sick too. Her arm grew into an ashen, swollen log.

The disease then moved to her legs. Her husband’s family rejected her, and she returned to Kyakatoma village with her children.

“I used to grow enough food for my family. For five years now, I have been stuck at home,” Mrs Tindimutuma says.

Ms Twasiima, sitting on a stool nearby, listens pensively. She covers the worst of the wounds with a dirty chequered handkerchief, tied around the leg, to keep away the buzzing flies.

As we speak, a neighbour joins us. The lower part of his leg has a deep, oozing ulcer. Out of politeness, I stop short of covering my nose from the putrid smell.

In 2015, a team of scientists visited the village searching for clues about this rare illness – classified by the World Health Organization (WHO) as a neglected tropical disease.

They took samples of the soil, and tested those who were sick.

Their results showed that the elephantiasis that has devastated dozens of families in Uganda’s western district of Kamwenge, is a rare type known as podoconiosis.

While the most common form of elephantiasis is caused by worms, microfilaria, transmitted by mosquitoes, podoconiosis results from exposure to minerals in the area’s volcanic soils.

“There are minerals such as silicon, iron and aluminium, really small particles which penetrate the skin,” says senior epidemiologist Christine Kihembo, who led the study while working at the ministry of health.

“They affect the normal flow of fluid in the limbs, causing the pain and inflammation. The condition manifests after years of exposure to the soil.” 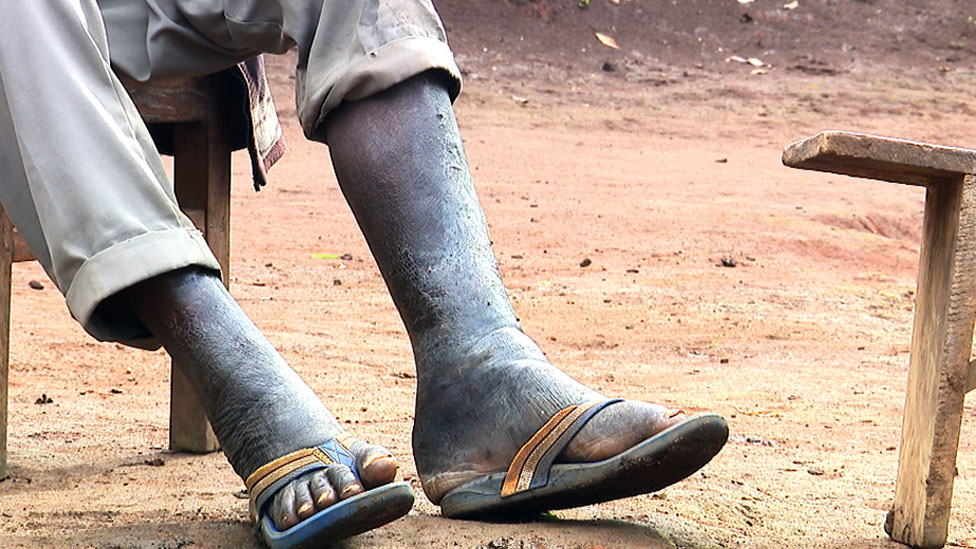 Some reports indicate that more than 300 people might be affected in the district of Kamwenge alone. A few cases have been seen further south in Kisoro.

Podoconiosis has also been recorded in Ethiopia, Rwanda and Cameroon. This type of elephantiasis is thought to affect about four million people globally, according to WHO estimates.

Families in Kamwenge derive their livelihood from the land. The locals work the rich soil with basic tools, and their bare hands.

After the findings of the study were published, the scientists advised the villagers to wear protective gear, and wash their arms and legs shortly after farm work. Gumboots became a prized possession, for those who could afford them.

In the neighbouring village, 39-year-old Provia Arinaitwe whimpers as she rises from a mat in front of her small house. She is down with a bout of malaria, which has meant days of not caring for her legs. And now the pains are back.

Her calloused legs are covered in dark marks, but Ms Arinaitwe does not have any festering wounds. She is in a better condition than anyone else I have met. And she shows me why. 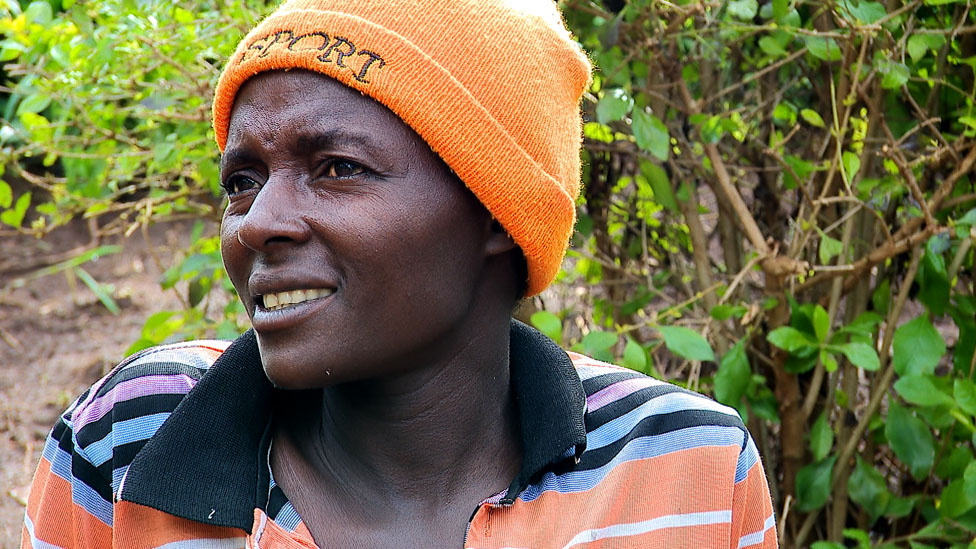 When I use salt three times a day, it gives me great relief… But sometimes I have no money to buy the salt”

After washing her feet in a plastic basin of water, she measures out three scoops of table salt in her palm, throwing it into in the clean basin, where her daughter pours mugfuls of water. She soaks her feet in the water for 15 minutes.

“When I do this, three times a day, it gives me great relief. I am able to go about my work. But sometimes I have no money to buy the salt, and the blisters and pain return,” she says, wincing as she slips the feet into a pair of slippers.

Dr Kihembo says that during the study, it was noted that people who washed their feet within at least two hours of finishing work on the farm were 11 times less likely to have symptoms of podoconiosis than those who cleaned up much later or not at all.

There are drugs available in Uganda that can treat the more common form of elephantiasis, but sufferers from podoconiosis can only get symptomatic relief through painkillers, which are hard to afford.

Everest Beyanga is a local volunteer who, in the absence of a government intervention, has made it his job to document this misery.

He carries around a sheaf of papers in a blue folder. 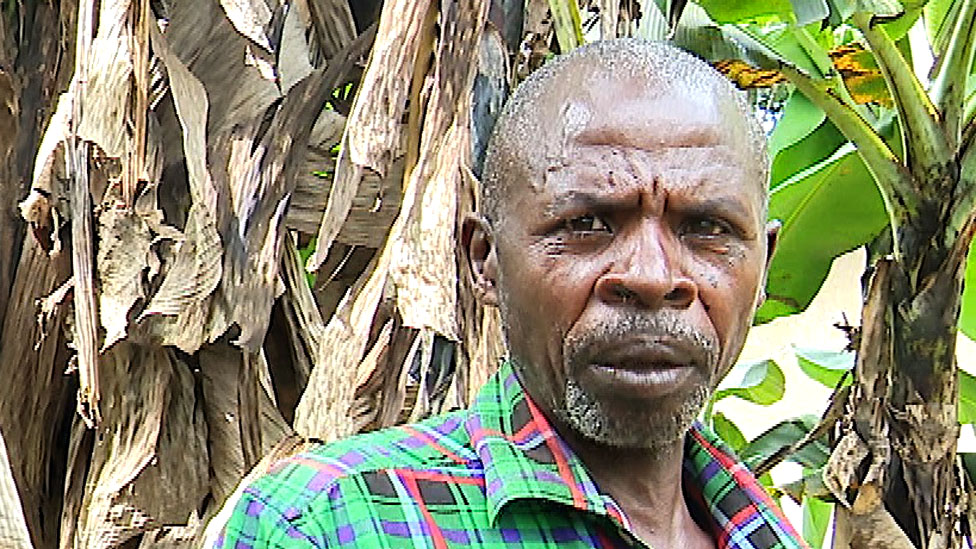 No-one was visiting these people. Everyone avoids them because their wounds stink”

Written on them are names, ages, villages: every single person suffering from this debilitating disease in his sub-county. On a separate sheet is a list of 30 who have died since he started doing his rounds.

He sighs with hopelessness: “No-one was visiting these people. Everyone avoids them because their wounds stink.

“I thought, ‘This is my village too.’ If the disease is indeed in the soil, we will all probably catch it.

“Sometimes, all one needs is for you to drop in and greet them. But sometimes I do not even want to come, because I don’t even have a pack of salt to offer them.”

At our last stop, the woman we have come to see asks after three people she knew, who had podoconiosis.

They have all died since he last visited, Mr Beyanga tells her.

She had not heard the news because she was not well enough to leave her home and no-one had come to see her.

Her furrows her brow in response and she hobbles way to prune her banana trees with a machete.