The man to fire Scotland to the Euros, or an overhyped, overpriced striker who has commitment issues with international football?

Oli McBurnie, the £20m Sheffield United forward, ought to be a priceless commodity for his country, but has yet to deliver on his promise. He remains a perplexing figure to Scotland fans, who have been lukewarm at best to his contribution – or lack of it – so far.

McBurnie had done his reputation no favours by withdrawing from Steve Clarke’s squad for the upcoming Nations League openers, then playing for his club two days later.

Amid the controversy, BBC Scotland examines whether the 24-year-old is a misunderstood talent worth persevering with.

Thrown in at deep end

Leeds born, but eligible through his grandparents, McBurnie made a low-key full Scotland debut in a 1-0 friendly defeat by Costa Rica at Hampden in March 2018.

His cap count now stands his nine, including five starts, and he is yet to break his scoring duck. It’s an inauspicious start deserving of a deeper look. 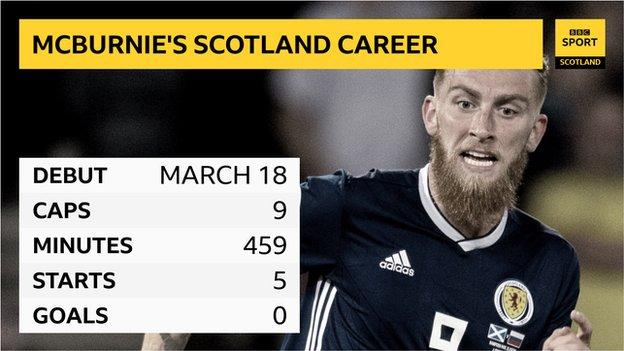 As a raw, young striker pitched into a side struggling under Alex McLeish, three of McBurnie’s first four appearances coincided with Scotland failing to score.

His game time totals just 459 minutes – over a third of that came in the end-of-season tour defeats by World Cup-bound Peru and Mexico two years ago, and the disastrous 3-0 loss at Kazakhstan in Euro 2020 qualifying. Scotland’s paucity of threat in those matches left him isolated and frustrated up front.

And McBurnie is not alone in having to wait to make a scoring breakthrough. Steven Naismith took seven games to net for Scotland – scoring once in his first 12 – while Leigh Griffiths’ first strike came on his 13th appearance.

Sharp for the Blades

McBurnie’s record at domestic level belies his faltering start on the international stage. His 24 goals for Championship side Swansea in 2018-19 convinced Sheffield United manager Chris Wilder to break the club’s transfer record for him.

The fee may have seemed steep, but his trajectory hasn’t taken a downturn. He was an effective part of a side that defied expectations by finishing ninth in their first top-flight campaign in 12 years.

Six goals from 36 league appearances made McBurnie the club’s joint top scorer and his 50 shots, and 111 touches in the opposition box, were both more than any team-mate.

In fact, the stats paint the picture of a well-rounded skill-set. Opta’s data for combined quality of scoring chances and opportunities created show he was the Yorkshire club’s biggest goal threat.

There’s more to his game than finishing, though. McBurnie won possession 16 times in the final third, a figure only bettered at Sheffield United by midfielder John Lundstram’s 17.

And McBurnie put his 6ft 2in frame to good use too. His 200 aerial duels won was the second highest tally of any Premier League striker, with West Ham’s Sebastien Haller leading the way on 218.

Why has McBurnie not been taken to the hearts of the Tartan Army? The absence of goals hasn’t helped, nor has an unfortunate incident a year ago when Sheffield United TV footage led to claims he was not keen on international duty.

Wilder batted those accusations away – saying his player is “proud” to play for Scotland.

Yet this week’s withdrawal is not a one-off. In October last year, McBurnie pulled out injured from Clarke’s squad for matches against Russia and San Marino, while playing for his club either side of that double-header.

And, including the two upcoming games, he has only been available for four of Clarke’s 10 matches in charge.

Pertinently, he still has the support of Clarke. While much of the fuss last week centred on Australia-born Lyndon Dykes’ first call-up, the head coach made an unprompted point of publicly praising McBurnie.

And Clarke was quick to offer an explanation for the striker’s 45-minute friendly outing for Sheffield United on Tuesday, explaining it “made sense” for him to stay with his club and continue his recovery from a foot problem.

With Scotland not exactly spoiled for choice up front as the seismic Euro 2020 play-off against Israel looms next month, Clarke can’t afford to write off McBurnie.

His country needs him more than ever, and he was the leading candidate to fill the lone striker role in the Nations League dress rehearsals. But that chance is now gone and the doubts over his reliability have heightened.

Speaking earlier in the week, McBurnie gave no hint of his impending absence as he noted the significance of the next two months.

“It’s a huge time for Scotland,” he said. “With the quality we have, we want to be qualifying for a major tournament. It’s been long enough now, so the time is right.”

‘With the right service, he’s unplayable’

I think he’s quality. He ticks all boxes as a striker – mobility, presence, link-up play. He puts his head where it hurts and is an absolute pain for defenders.

With the right service, he can be unplayable. He gets a bit of stick, but doesn’t shy away from it. Once he gets his first Scotland goal and that weight is off his shoulders, he can kick on.

He has pulled out a couple of squads but the public never really know what players are carrying – I once joined the Scotland squad with a hamstring injury that I’d just suffered and I couldn’t walk.

So I did nothing for 10 days, had one day’s training back with Burnley, then scored a hat-trick the next day. It’s not prioritising club over country, it’s just doing what’s right for your body.

Where does PL go now after Super League debacle?