Esther Kiama was working as a teacher in Nyeri, central Kenya, when she received the call.

Her husband, David, was unwell.

“And it is not a minor illness,” the caller emphasised, and then explained: “It’s a mental illness.”

At that point, in 2005, Mrs Kiama had not seen her husband much over the previous year as he had moved to another town to set up a business.

On the times she visited she had not noticed his health problems.

But once the call came, Mrs Kiama left immediately to find him.

“We had to go get him home so that he could get medication,” she told the BBC. 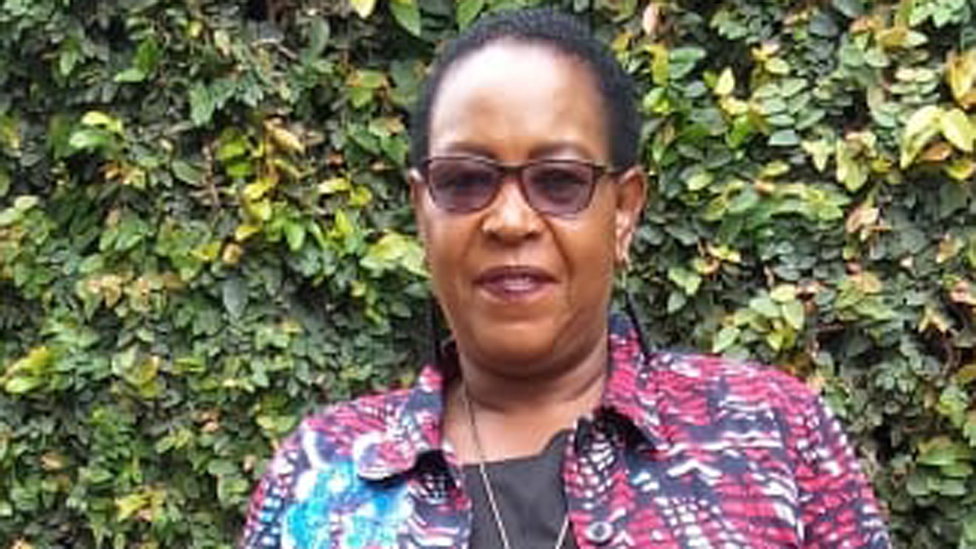 Mrs Kiama said that her husband “would talk to himself, throwing his arms about, appearing to be talking to people while there was really no-one he was talking to”.

She was describing what later would be diagnosed as bipolar disorder.

“It got worse when he came home. I would leave him in the house and one day I found that he had burnt the ceiling, saying there were strange people he was looking for up there.”

It was as if her husband had transformed into someone she did not know, and she did not understand what was happening.

‘You have bewitched our son’

She decided that she would take him to hospital but her relatives would not let her.

They accused Mrs Kiama of casting a spell on her husband.

“His dad came to take him and said: ‘I have been told that my son is sick, I have come because you have bewitched him.'”

The forceful removal of her husband of 15 years was a traumatic experience for her and their four children.

“I was shocked at first, but I’m a believer, even though it really shocked me, I believed this would end,” she said.

Meanwhile she could see that her husband’s health was deteriorating.

But because of their belief that he was under a spell, Mrs Kiama’s in-laws did not look for medical help.

Mental health problems in Kenya are sometime associated with witchcraft or curses, rather than something can be treated or managed.

Kenya’s ministry of health says that many people do not seek help for these kinds of conditions and would rather conceal their illness.

The World Health Organization estimates that one in four people will be affected by a mental health problem or neurological disorder at some point in their lives.

There are no up-to-date figures for the situation in Kenya – an indication, perhaps, of how much work needs to still be done on the issue in the country.

Chased with a machete

For three years, Mr Kiama was a burden to his parents, especially to his elderly mother who at some point fell ill, seeing the sad state of her son.

Occasionally, neighbours would contact Mrs Kiama about her husband.

“Sometimes I’d be called to be told that he was in town roaming about and I’d go hire a taxi and take him back,” Mrs Kiama says. She would at times go and cook for him.

But she was still blamed for her husband’s behaviour and this filtered through to him.

“He once chased after me with a panga [machete] saying: ‘You bewitched me.’ But I asked him: ‘If you kill me, who will cook for you?’ He then threw away his panga,” she said.

Mrs Kiama was grateful that except for that incident, her husband was not violent.

What is bipolar disorder?

Mrs Kiama said it was difficult watching someone she loved suffering so much from an illness that she hardly understood. She also struggled with the reaction she got from friends.

Many turned their backs on her.

Kenyan psychotherapist Maggie Gitu, who specialises in marriage, family and sex issues, said it was not right to label mentally ill people as “insane” or “crazy”, as often happens.

The labels obscure understanding the condition.

She told the BBC that medical check-ups were necessary to determine what kind of mental disorder a person could be suffering from.

She said that mental health problems could be triggered by stress, feelings of loneliness, fear, panic or a feeling of not being appreciated.

Despite her husband’s condition, Mrs Kiama was not going to abandon him, against all the advice from her friends.

“I told them it was because of the vow. We had had a church wedding. He came to pick me from home, as a young bride.

“To say the truth, we loved each other very much… we had four children”.

In the end, Mrs Kiama decided that she was going to reclaim her husband from her in-laws.

“After three years, I told my children [that] we are going to steal dad,” she said.

Together with her children and a psychiatrist, they devised a way to get her husband out of his parents’ home.

By then, she said: “His finger and toe nails had grown long and dirty that it would take days to clean them. His beard and hair had overgrown so much that it gave him a horrible appearance.

“He was like Nebuchadnezzar of the Bible, totally unkempt.”

Back with the children

Mr Kiama’s bipolar disorder was then diagnosed and he was admitted to hospital for about two months.

Since leaving hospital, he has been recovering at home, although he is still on long-term medication.

The family is now back together.

“The doctor has counselled my children, how to live with their dad and they should love him the way he is… and it has worked,” Mrs Kiama said.

Explained: What is mental health and where can I go for help?

Mood assessment: Could I be depressed?