Manchester United manager Ole Gunnar Solskjaer has seen “plenty of positives” from Paul Pogba despite the midfielder’s crucial mistake in the home defeat against Arsenal on Sunday.

Pogba, 27, conceded a penalty to allow the Gunners to grab a 1-0 victory.

“Paul knows in that exact instance he could’ve done better and held his hand up,” said Solskjaer.

An ankle problem restricted the former Juventus midfielder to 22 appearances in 2019-20, while he also tested positive for coronavirus in August.

“Every player is frustrated himself and is disappointed after defeat,” said Solskjaer. “We need consistency from every one of our players.

“Paul has gone through a difficult period with an injury last season and Covid, now working up to full fitness. We have seen plenty of positives now and hopefully more can continue.

“It’s high intensity and the fitter you are the better.”

Manchester United will be without midfielder Jesse Lingard who has not travelled while full-back Alex Telles is unavailable after recently testing positive for coronavirus. Centre-back Eric Bailly remains sidelined.

Ex-Liverpool defender Martin Skrtel should start at the back, alongside on-loan Celtic full-back Boli Bolingoli.

Data analysts Gracenote say Manchester United have a 91% chance of progressing to the knockout stages of the Champions League.

Simon Gleave, head of sports analysis at Nielsen’s Gracenote, said: “Manchester United began the Champions League as third favourites to progress from Group H. Two matches later and United are firm favourites having beaten both of their main rivals for a place in the knockout phase.

The Euro Club Index estimates that the Red Devils have a 91% chance of finishing in the top two and a 60% chance of winning Group H. Two matches against bottom club Istanbul Basaksehir now should seal United’s place in the last 16. 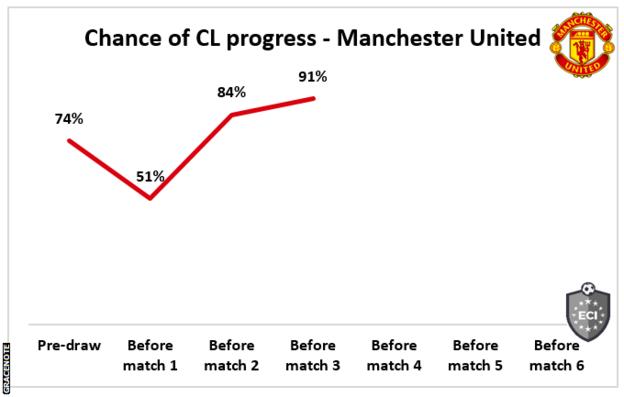