Kenyan Mary Wambui is still traumatised by the deaths of her daughter and three-year-old grandson after they were hit by a vehicle in 2016.

They were trying to cross a busy six-lane highway close to Kenya’s capital, Nairobi, when the accident happened.

Ms Wambui’s daughter, Monicah Nyambura, died on the spot, but her grandchild, Brian, who was badly injured, spent much of the following year in hospital before he too died.

They were just two of the almost 3,000 people who were killed that year on Kenya’s roads, where safety rules are often poorly observed.

Deaths and injuries from traffic accidents across the continent are considered to be a major health issue by the World Health Organization (WHO).

“I miss them all. I miss them,” she told the BBC as she sat by Brian’s grave.

“He was the grandchild who would stay with me when the rest would leave the house in the morning,” she said.

The wooden cross on the grave was broken, but the grieving grandmother said she would let it stay that way.

There was nothing that could assuage her pain. 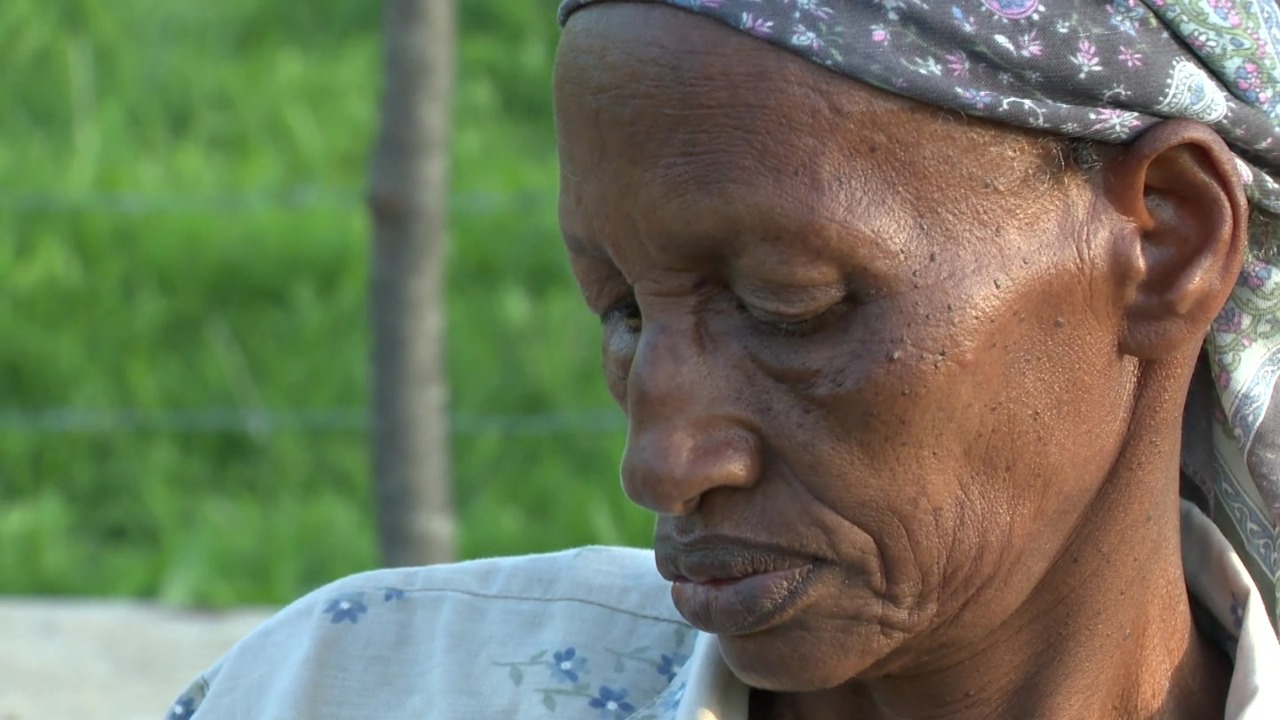 “I couldn’t. I don’t know what to tell you. I didn’t even have tears.”

The elderly woman said she spent most of the time after the accident by Brian’s bedside in hospital.

She finally cried when he died. There was a terrible pain in her stomach that would not go away, she said.

Her daughter, Ms Nyambura, was killed while crossing the busy highway rather than using a footbridge, as the nearest one was too far away for her.

In response to her death, her mother has asked the authorities to build more footbridges on the roads, so other fatalities can be avoided.

Currently, pedestrians make up the largest number of people killed on Kenya’s roads, accounting for nearly 40% of the 3,572 road deaths last year, according to the National Transport and Safety Authority (NTSA).

“You find people being hit right below a footbridge,” ex-NTSA chief Francis Meja told the BBC.

“You ask yourself, really, are people not sensitive to this fact? From where we sit, we think this is out of ignorance or impunity.”

It is not uncommon to find people crossing the wide lanes of Thika highway, the road that claimed Ms Wambui’s daughter and grandson, as well as other major routes in and around Nairobi.

In some places, there is barbed wire on the barriers to deter people from taking the risk, but it is not always effective.

Across University Way, a major route out of the centre of Nairobi, groups of people are constantly hurrying across the six-lane highway, almost oblivious to the lurking danger of the vehicles that speed by.

Crossing the road at this point is the fastest way across, Tiffany Njeri told the BBC.

Her friend Anne Katsutsu agrees, saying they did not notice the footbridge that they are meant to use.

But the safe crossing is not so far away.

Another pedestrian, Ramadhan Abdallah, said it was a matter of laziness, plus a lack of enforcement of the rules, which meant that people do whatever is convenient for them as long as no-one from the authorities is watching

“I was just calculating… to walk from here to the footbridge [is too far]… and I can just cross here,” he said.

“I’m not worried about safety… since there are many of us, there is that psyche [that we’re safe] and so I just cross.”

The high number of pedestrian deaths is similar across sub-Saharan Africa, according to the WHO.

Overall, the region has the highest number of deaths on the road as a proportion of the population, WHO figures show.

This is despite sub-Saharan Africa having the lowest number of motor vehicles.

93% of world’s road fatalities occur in low and middle-income countries, WHO says

Suggesting one reason why there are more road deaths in Africa than elsewhere, the WHO said in a 2018 report that there was a significant link between a country’s income level and the level of traffic fatalities.

It suggested that adequate road safety rules and speed limits were not enforced or observed in many poorer countries. It also said that a lack of child seat belts and drunk driving contribute to the high death toll.

“Whereas 60% of countries with laws meeting best practice are from the European region, only 2% are from the African region,” the WHO report said.

It added that in many countries, vulnerable road users, such as pedestrians, are largely ignored in the planning, design and operation of roads.

Travelling around Nairobi, it is clear that makeshift markets and hawking can block people on foot and encroach on the highway, forcing people to walk on the road.

Mr Meja said the WHO recommends that 10% of total road construction costs are spent on safety initiatives – but in Kenya the figure is less than 1%.

He told the BBC there is more the government can do to protect the vulnerable and create awareness.

But a recent study by the Overseas Development Institute said that persuading people to behave more safely would not solve the problem as the underlying causes of incidents, such as road design and better urban planning, need to be addressed.

In the meantime pedestrians, like Ms Wambui’s daughter and grandson, will continue to pay a heavy price because road designs prioritise cars and other motorised transport.

What is the Basketball Africa League?

Ben Kielesinski: The man who took the world on an adventure