It is rare to have a conversation in Nigeria about the problem of falsified medicine without a mention of the My Pikin syrup tragedy.

In 2009, 84 children were killed by a batch of teething syrup that contained diethylene glycol, an industrial solvent and ingredient found in antifreeze and brake fluid. Two employees from the company which made the syrup were found guilty by a court.

The case was significant as convictions for manufacturing or selling falsified medicines remain uncommon in Nigeria.

“That’s the one that got into the papers,” Dr Alero Roberts said, adding: “We’ve had numerous issues.”

Dr Roberts, a senior lecturer at Lagos University Teaching Hospital, is lucky that the hospital has a robust drug procurement system and they do not have problems with falsified medicines, although they do see patients who have encountered bad drugs.

She is concerned there may be more in the coming months due to the effect Covid-19 is having on the supply of drugs in Nigeria.

When hospital pharmacies go out of stock, patients will purchase drugs elsewhere, often from unregulated markets. And they do not need to go far, outside her hospital window Dr Roberts can see marketers selling two things – “drugs and coffins”.

Street sellers peddling drugs is a familiar scene across West Africa – where in many countries the sale of pharmaceuticals is more a trade than a profession. 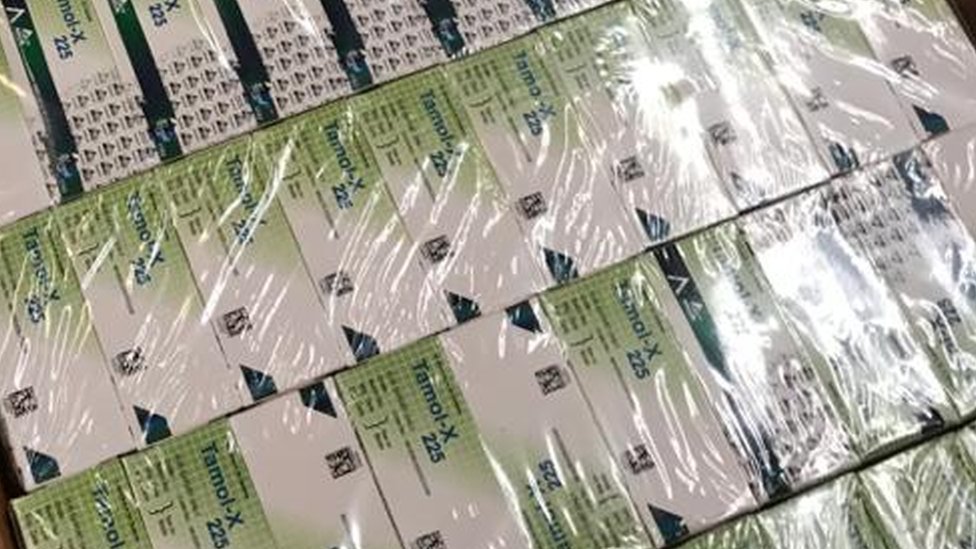 The lack of regulatory oversight is one of the reasons why the region is so attractive to criminals in the business of falsifying medicines. And in West Africa it is a big business.

The criminals have been keeping the head the International Copyright Unit at the customs service, Mohammed Babandede, and his team busy of late as the pandemic has created the perfect storm for fake medicines to flourish.

“It is really scary,” he said, adding that in one week more than 30 million counterfeit tablets had been seized.

He explained that authorities in India had provided intelligence on a shipment coming into Tin Can Island Port in Lagos, the commercial capital.

In the same week, he also intercepted 920,000 fake tramadol tablets at Lagos airport that had come from India’s main city, Mumbai. These pills were likely destined for markets in northern Nigeria where abuse of the drug is rampant.

You may want to watch:

Mr Mohammed said that catching the suspects was difficult as consignments were often labelled with fictitious addresses at both ends – meaning authorities cannot trace the goods to source.

In Nigeria, when there are arrests, often the networks are so powerful that there are rarely prosecutions – the best lawyers are hired to negotiate bail or find ways to adjourn court cases for many years.

Adebayo Alonge knows all too well how dangerous these groups are. A victim of fake drugs himself, Mr Alonge purchased salbutamol in 2003 from a chemist in Ibadan in the south-west.

The drugs were falsely labelled and contained fatal levels of diazepam that left him in a coma for three weeks. 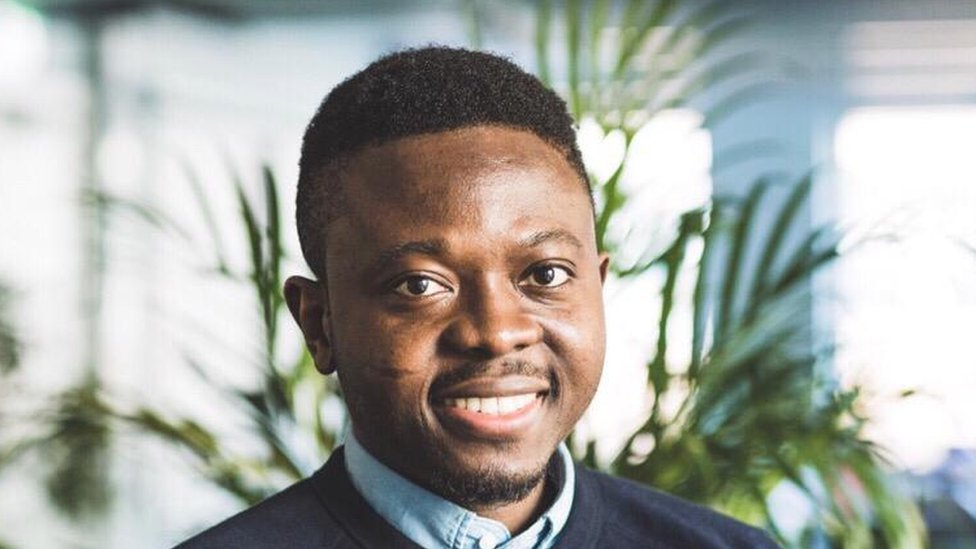 I have died once already. I’m not afraid to die again”

This experience inspired him to launch RxAll, a company that uses technology to identify the quality of prescription drugs.

Last year, he started receiving death threats for his work.

“We won’t stop – I have died once already, I’m not afraid to die again,” he said.

Holed up in small warehouses in cities across West Africa there are people in the business of repackaging pharmaceuticals.

They may also be busy tampering with expiry dates or manufacturing goods from scratch.

Sometimes, these clandestine make-shift laboratories are raided by enforcement agencies and the goods are destroyed – but the scale of the networks and operations mean it does not take long for them to pop up elsewhere.

The routes criminal groups are taking are becoming increasingly complex.

“They are getting wiser. If you block a route, they will find a different one. This is why it is a big problem in West Africa and Nigeria,” a visibly concerned Mr Mohammed said.

The UN Office on Drugs and Crime and World Customs Organization have set up a special unit to help regional states fight the criminal networks.

Bob Van den Berghe, a law enforcement expert who is attached to the unit, said that 81kg of pharmaceutical products in a container labelled as carrying “boxes of humanitarian donations” were seized from a port in West Africa earlier this year.

That container was shipped from France, but officials have uncovered fake medicines in containers originating from a wide range of countries, including Brazil and Switzerland, he said.

The unit reported that its highest number of seizures were at ports in the Togolese city of Lomé in Togo and Cotonou in Benin.

Containers that get past port surveillance teams are stripped and the medicines broken up into smaller packages, then taken across borders – some go north to Burkina Faso, others into Ghana and on to Ivory Coast, and others east into Nigeria, research shows.

Matter of life and death

With under resourced border teams and large porous borders, authorities have their work cut out.

“We are ramping up our operations, focusing on more border crossing points to respond to the efforts of these criminals,” Mr Van den Berghe said.

With an estimated 116,000 deaths a year caused by substandard and falsified anti-malarial drugs in sub-Saharan Africa alone, these operations could be a matter of life and death.

Yet, experts warn that if the overall war against fake medicines is to be won, more must be done to ensure access to healthcare for all.

“There must be a parallel effort to fix vulnerabilities in health markets in West Africa; in some countries, wealth has become a determining factor for gaining access to quality healthcare and drugs.”

“Hopefully the weaknesses in health systems Covid-19 has further exposed will lead governments to prioritise ensuring every citizen has access to safe and affordable medicines”, said Dr Gernot Klantschnig, a senior lecturer in International Criminology at Bristol University in England.